Who will be PM now? 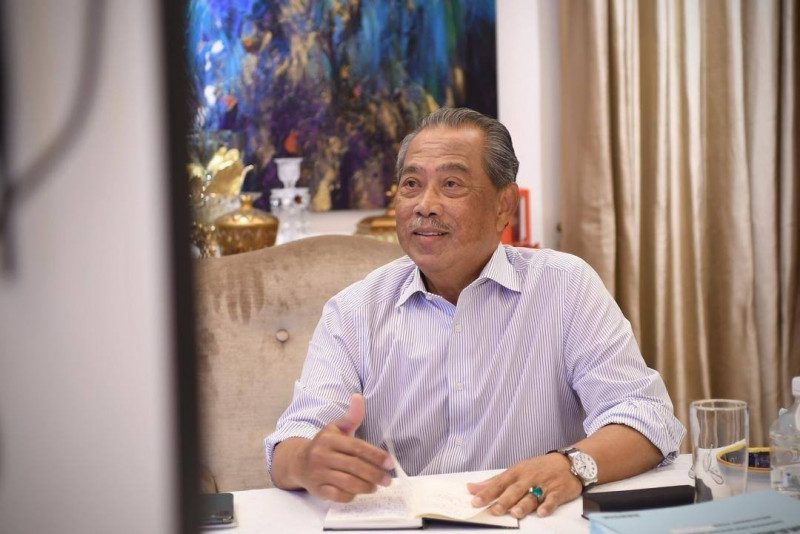 A STRAIGHTFORWARD analysis indicates that in this round of the constitutional crisis the battle will be between Prime Minister Tan Sri Muhyiddin Yassin and challenger Datuk Seri Anwar Ibrahim.

All the hullabaloo over whether Anwar has the support of the majority and the commotion created shows that there is some truth to his claims.

There is now rear-guard action to ensure that if he indeed has the majority, he will not be able to exercise it while he has it.

The sequence of events so far indicates a stalling action by Muhyiddin against the motion of no-confidence against him, the notice for which has been given by several people to Dewan Rakyat Speaker Datuk Azhar Azizan Harun, popularly known as Art Harun.

Azhar strangely keeps insisting that such motions should remain at the bottom of the pile and take its turn – which means never – a roundabout turn from his previous assertion in his video blog Art of the Matter in 2015 where he insisted that a vote of no-confidence takes precedence over everything else.

Here’s the video to that show – go to around the ninth minute of the video and you will hear it loud and clear.

Art explained in the video artfully about how the government had delayed the hudud bill, introducing Islamic law that PAS had proposed.

What made Art change his mind now? We can only speculate but what is clear is that a no-confidence vote in the Dewan Rakyat is unlikely to be brought to the top of the pile any time soon.

The stalling will continue, especially when the Yang di-Pertuan Agong himself has indicated that he would like all parties to sort things out themselves during this period of the Covid-19 pandemic.

It does not appear much will get done until the conditional movement control order is over – we will know next Tuesday if it will be extended.

This will buy Muhyiddin valuable time during which desperate talks will continue with Umno to stop that swing to nuzzle into Anwar’s folds. Umno will clearly horse-trade, and go for the one who gives them the better deal.

We can decisively count out Tun Dr Mahathir Mohamad despite the attempt by his Pejuang group to put him on the list of potential prime ministers.

Nobody really wants to give him a third chance to fail and betray the country – he has had more than enough chances and he has bungled each time, big time.

Dr Mahathir himself knows it which is why he is widely thought to be the person who has put Umno veteran Tengku Razaleigh Hamzah to position himself as an alternative to Anwar in the current period where Umno is very dissatisfied with its relations with Muhyiddin and Bersatu.

Razaleigh is a long shot but cannot be totally discounted. For example, look at Dr Mahathir’s ignominious return and how it has set the country back.

The other thing to ask is whether Tengku Razaleigh will be very effective and be able to move forward and be clearly better than Muhyiddin and his motley crew.

Coming from the same Umno mould and working with the same people, it is too optimistic to expect much from him, even if he can rally to get the right support.

That will depend on who’s supporting him and how much he is willing to spend, and how badly Dr Mahathir and gang do not want Anwar as prime minister.

But still I would rate Tengku Razaleigh’s chances to be low. I cannot see where he is going to get his numbers.

That leaves Anwar against Muhyiddin. If there is a parliamentary vote today, Muhyiddin will fall and probably Anwar may be able to command a majority with whatever deal he has struck with Umno. But a vote won’t take place soon.

The opposition may still be able to unseat Muhyiddin through a vote against the 2021 Budget due to be tabled on November 6. If Dewan Rakyat does not pass the budget bill, that is effectively a vote of no-confidence and will mean Muhyiddin has to tender his resignation – at least that is what is done in conventional parliamentary democracies.

Which is why Muhyiddin will be working overtime to reach rapprochement before then with Umno – that’s about his only hope to retain power. Even as I write, this is taking place.

Umno is filled with unprincipled people and when you deal with them, they will take the path that gives them the most benefit. And Muhyiddin will dish it out now because his political life depends on that.

What Muhyiddin has taken for granted was Umno. He tried to do what Dr Mahathir did to PKR and DAP – under-represent them in cabinet despite the numbers of MPs they had – three to four times that of Bersatu for each of them.

But Dr Mahathir was wilier. He seduced DAP secretary-general Lim Guan Eng with the finance portfolio, and Datuk Seri Mohamed Azmin Ali, a former Anwar loyalist, with the economic affairs position, driving a wedge between them and Anwar/PKR.

Now, Muhyiddin will have to give much more to Umno or he will risk losing power. Will the government improve? No.

It will be the same group of corrupt, incompetent people running the country. Expect more Umno/Bersatu-style cronyism and patronage, and the country sinking deeper into a morass to our collective loss.

Muhyiddin’s government has an abysmal record – almost every Perikatan Nasional (PN) MP now has additional income through a GLC or other positions.

He delayed the Dewan Rakyat sitting to avoid a no-confidence vote even to the extent that Covid-19 aid to the poorest could not be increased to more meaningful levels.

Elections were forced in Sabah where multiple money-laundering charges against Tan Sri Musa Aman were dropped prior to him announcing he had majority in the state assembly via party-hoppers.

The unrestricted campaigning unleashed the worst outbreak of Covid-19 in Sabah with consequential effect on the peninsula from returning politicians, a clear situation of allowing politics to trump the welfare of the people.

And then as Anwar insisted he had a majority in Dewan Rakyat, the PN government imposed the conditional movement control order, too late for Sabah and too early for Kuala Lumpur, Selangor and Putrajaya, as I explained in this article.

Anwar has an outside chance though. Umno is split almost down the middle.

Who will be deputy prime minister for instance? Who will be removed to make way for more ministers? Or will it be simply the creation of even more ministries?

If negotiations get bogged down in these areas, Anwar may have a chance.

If he does, it means Umno or part of it and DAP will be on the same side for the first time ever.

There is a possibility of injection of better ministers from PKR, DAP and Amanah, and some of the better quality candidates from Umno as well.

But the majority of ministers will be from Pakatan Harapan collectively – what would have effectively happened is that PH would have kicked out Bersatu and taken in Umno instead, not a bad trade in terms of numbers.

But what is different is that PKR will now be at the controls, not Bersatu or Umno.

That would be a definite improvement over the old PH government led by Dr Mahathir and in which key players included Muhyiddin and Azmin.

These were the three who schemed and connived to abort the original manifesto promise – a transition from Dr Mahathir to Anwar. That was ultimately the cause for this current predicament.

Will Anwar have his day? Perhaps not, the odds seem to favour Muhyiddin to the country’s detriment.

Umno will do what is best for itself, specifically the best interests of the individual MPs. When you make deals with the unprincipled, you must expect to be played.

At the end of the day that may even be the best result because it provides PKR and its allies – PH without Bersatu or Umno – to rebuild, reunite and remake by placing integrity, accountability and competence at the top of its priorities to ensure growth with fairness for all.

At the end of the day, that is the only way this country of ours can start moving forward again – without apology or compromise. – The Vibes, October 20, 2020

P Gunasegaram says we cannot legislate integrity – we simply need better people at the top. He is editorial consultant of The Vibes.