Bar Dr Mahathir from any partnership with Pakatan 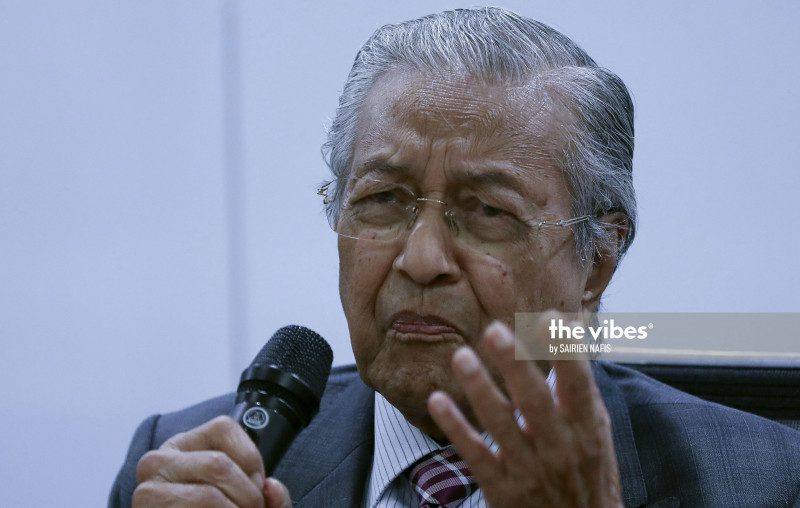 If you tell a lie big enough and keep repeating it, people will eventually come to believe it. The lie can be maintained only for such time as the State can shield the people from the political, economic and/or military consequences of the lie. It thus becomes vitally important for the State to use all of its powers to repress dissent, for the truth is the mortal enemy of the lie, and thus by extension, the truth is the greatest enemy of the State. – Joseph Goebbels (October 29 1897 – May 1 1945) Propaganda Minister of Nazi Germany from 1933 to 1945

AS talk of a general election makes the rounds again with continued political uncertainty still in the cards, an ominous development is the possible partnership between Pakatan Harapan (PH) and, of all people, Tun Dr Mahathir Mohamad, yet again.

That is a rather disturbing, depressing development and is bound to end in great grief for PH and its head, Datuk Seri Anwar Ibrahim, because Dr Mahathir will do exactly what he did before – drive wedges between the core PH partners and inveigle himself into a position of power; the most powerful position, if possible.

Just look at how he controlled everything post-14th general election. This included getting his crony Tun Daim Zainuddin into an important position as head of the Council of Eminent Persons to effectively become the economic czar with more powers than even then finance minister Lim Guan Eng.

Lim’s appointment as finance minister and Anwar loyalist Datuk Seri Mohamed Azmin Ali as economic affairs minister created a rift between the duo and Anwar, who was not consulted on the appointment despite being the de facto leader of the coalition that won the election.

PH, their component parties, Anwar and all who agree to a new partnership with Dr Mahathir must be suckers for punishment for at the end of the day, it is obvious to anyone who tracks Dr Mahathir that his twofold aim is to both prevent Anwar from becoming prime minister and utter dominance of politics by the Malays, no matter the cost.

In terms of using propaganda to further his own political aims and ambitions, few can be as brutal, blunt, devious, and plain, downright dishonest and untruthful as former prime minister two times over Dr Mahathir.

He is now giving interviews to whoever will take them to espouse his venom and lies, preparing to again be at least a power broker when the election comes around. The lies include that he won the election in 2018, that Tan Sri Muhyiddin Yassin is a dictator and he was not – it goes on.

Never mind that the song is jaded and untruthful; he knows the power of repeating it again and again and remaining in the public eye so he does not fade from the spotlight. As long as he remains there, he has hope.

Joseph Goebbels’ propaganda philosophy and practice as outlined at the start of this article suits him perfectly. The big lie that he and his supporters, including senior DAP leaders who should have known better and who suffered at his hands, perpetrated over and over was that he was needed to win the election.

This is despite the fact that PH, then in partnership with PAS, got more than half of the popular vote in the 2013 elections and was a whisker away from winning, despite the fact that Dr Mahathir, openly and vocally, endorsed Umno and Datuk Seri Najib Razak then. It was Najib’s first elections after taking over the premiership from Tun Abdullah Ahmad Badawi, who did poorly in the 2008 election.

The second major lie that was repeated time and again after Dr Mahathir became prime minister the second time was that he was responsible for the May 2018 election victory of PH, which went counter to the facts as represented by the results.

A fairy-tale return of an aged warrior after an absence of 15 years captured the imagination of Malaysians and resulted in their unwarranted, irrational adulation of Dr Mahathir, despite clear evidence staring them in their face.

Dr Mahathir’s Bersatu only won 13 seats out of 52 contested in a dismal 25% win rate. PKR won 47 at the end of the election and DAP 42, clearly the two parties that spearheaded the win.

In the Malay heartland states of Perlis, Kedah, Terengganu and Kelantan, where Dr Mahathir was to have brought in the Malay votes, Bersatu was almost wiped out. If not for the alliance with PH, Bersatu would have won even fewer seats.

The third major lie was that he was going to be prime minister only for as long as his coalition partner Anwar was able to get a pardon and be in a position to become prime minister. The day came and went and Anwar waited.

Dr Mahathir put that off for as long as possible, eventually withdrawing support for Anwar, plotting a unity government where he would have effectively become dictator, and leading to the collapse of the PH coalition.

Until now, some conspiracy theorists believe he plotted with current prime minister Muhyiddin and PKR traitor Azmin to obtain power without PKR, removing Anwar from the equation. But the other two played out Dr Mahathir at the last lap, nudging him out of the race and taking power instead.

Whatever the current outcome, Dr Mahathir, a bigoted racist of the Ketuanan Melayu mould who has all his political life believed that Malays should have total political dominance without sharing political power, and who has exhibited a dogged hatred for Anwar despite a public reconciliation, must be happier with the current arrangement than one where Anwar became prime minister.

It does not matter to him even that the current government is corrupt, and a is backdoor one that has no political legitimacy which is offering government largesse to members of Parliament to stay in power. And he continues to deny that it was his decision to dishonour PH agreements that led to the backdoor government in the first place.

But, as Goebbels said: “The lie can be maintained only for such time as the state can shield the people from the political, economic and/or military consequences of the lie.” Thus when PH collapsed and along with it the hopes and aspirations of the majority of Malaysians for a better, reformed Malaysia, Dr Mahathir’s fame turned into infamy. The people turned against him.

The lies disappeared like mist under the gaze of the rising sun and Malaysians saw Dr Mahathir in the light of day for what he was – a bigot, liar, traitor and cheat who betrayed PH for his own selfish, demented purposes – a person who cannot be trusted.

PH must be out of its mind to be contemplating, even for a moment, the return of Dr Mahathir. Why, all he would do is destroy PH from within if it came into power, just as he did a year ago. – The Vibes, January 19, 2021

P. Gunasegaram, editorial consultant of The Vibes and executive director of advocacy group Sekhar Institute, says that people like Goebbels and Dr Mahathir can shape public opinion in their favour because memories are short and fairy tales are alluring