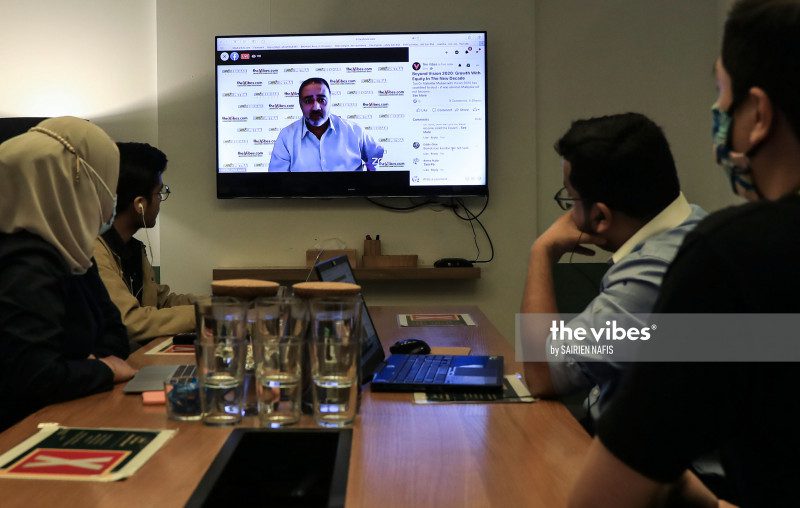 The Petra Group chairman and group chief executive said this (failure) is evident with Malays still making up the majority of hardcore poor, race relations being at an all-time low and polarisation seeing no improvement over the years.

“I shouldn’t be harsh on the idea of Vision 2020. It never was (a bad idea), just like the 1Malaysia campaign under Datuk Seri Najib Abdul Razak.

“Both had the right attitude and purpose behind them, but unfortunately, they were taken over by political necessity.

“The reality is we need to blend the two together – idea and implementation. It must not be that only the vision is good. When right ideas are drawn up, politicians and other stakeholders should push forward with them,” he said.

Sekhar was speaking at the “Beyond Vision 2020: Growth with Equity in the New Decade” webinar co-organised by Sekhar Institute, The Vibes and Petra Group today.

It was moderated by The Vibes editorial consultant P Gunasegaram.

Vision 2020, which was the brainchild of former Prime Minister Tun Dr Mahathir Mohamad, was aimed at pushing Malaysia to be a fully developed country and to become a self-sufficient industrialised nation by 2020.

Sekhar said the challenge to this was establishing a nation that is united, harmonious, democratically mature, politically stable, ethical and tolerant, apart from fostering a prosperous society with a fully competitive and dynamic economy.

He added that Vision 2020 failed on many fronts, and that it was unfortunate that the country “squandered” on the abundance of wealth and resources at its disposal that not many other countries had.

“Malaysia was in a position to really rule this region, going even beyond Korea and the likes. That was what we were set up for.

“Unfortunately, institutions around us were disrupted, whether it is the judiciary, the way the economy was led, or the way corruption was allowed to take hold of our institutions and our backbone, be it education or anything else.

“I would argue that despite the pandemic, we were already heading into a bad position, because of the structure of our society and economy,” he said.

Sekhar said since independence, rather than fixing problems the country was facing, those in power instead used band-aids and put up a facade to cover up issues, but never truly getting to the bottom of those problems.

Comparing Malaysia to a house, he said: “We are now at a stage where the house is about to fall. We can’t carry on like this. We need to tear down this house and build a new one for future generations.”

He added that the Covid-19 pandemic has now offered a glimmer of hope for Malaysia to rebuild, seeing that all countries are affected globally, and that it is only a matter of political will and leadership. – The Vibes, November 12, 2020

Follow The Vibes to read our series of in-depth articles based on discourses held during the webinar titled ‘Beyond Vision 2020: Growth with Equity in the New Decade’, from Thursday till Monday